A friend suggested I try a new thing. All of my Because Patterns designs are based on squares for their symmetry are mostly square in shape (I've got a couple that are rectangles, but mostly it's squares... or infinite tessellations where the repeating bit is a square.)

And then we watched a video about hexaflexagons. And the person decorated her hexaflexagons, so my friend, awesome (and ausome!) as he is, suggested that I make a hexagonal pattern.
Which means triangle paper.
Well, triangle dot paper.
Equilateral triangle dot paper. Which you can never make perfect because sqrt(3)/2 is irrational and printers work with whole numbers of pixels, but that's OK because we can get as close as we want, right?
Right.
But if we get too close, the ratios are huge and the best resolution the printer can get isn't infinite.
We can still get good enough. The printer I have access to in the engineering computer center prints photos at 600 dots per inch. You can get pretty close with 600 dots per inch, even with having the triangle sides only be a quarter of an inch. 150 dots per (horizontal/vertical) triangle side.
And a pixel isn't a point. It's a box. We can find which box the exact point belongs in and color that pixel dark. And it will be good enough.
And I had all this philosophizing before I did the logical thing. I Googled triangle dot paper. Lo and behold, the same site I use to make my square dot paper does triangles too. So I made a pdf and printed a couple copies to play with.
And I made a hexagonal pattern! 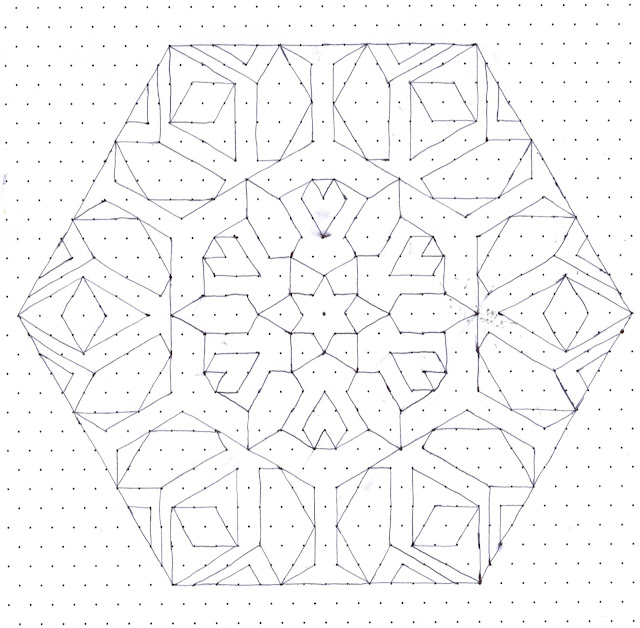