The ignorance is rampant. The ignorance has been rampant.
We have been responding. We will continue responding.
And we are becoming more proactive.
Rather than simply trying to refute, we are putting our own statements out.
Correcting misconceptions only sometimes works, but stating something new makes a new association.
That's what we're doing.
Paula's This is Aspergers. This is Autism. does this.
Autism Shines does this.
Autistics, Not Monsters does this.
The Autistic Adults Picture Project has been doing this for years.
People are sharing responses at thAutcast.
Lydia of Autistic Hoya is making a video using pictures along these same lines.
I made one, using an old picture of mine. 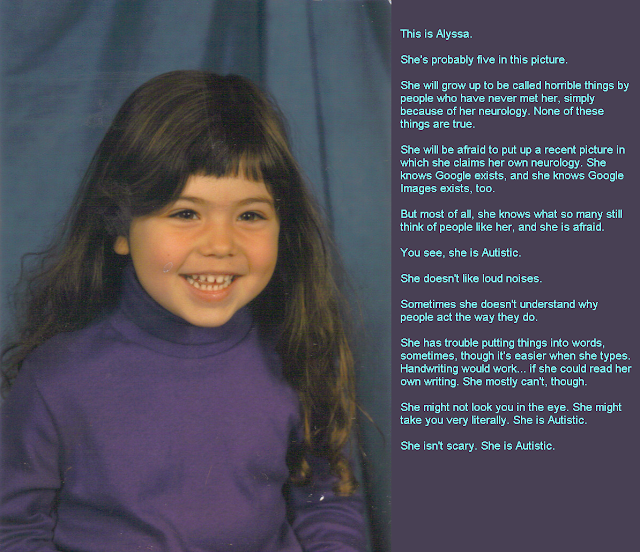 Image description:
At the left side, there is a young girl sitting for a picture. She has long brown hair, is wearing a purple turtleneck, and is smiling with her teeth not quite together. At the right is the following text, blue on a purple background:
This is Alyssa.
She's probably five in this picture.
She will grow up to be called horrible things by people who have never met her, simply because of her neurology. None of these things are true.
She will be afraid to put up a recent picture in which she claims her own neurology. She knows Google exists, and she knows Google Images exists too.
But most of all, she knows what so many still think of people like her, and she is afraid.
You see, she is Autistic.
She doesn't like loud noises.
Sometimes she doesn't understand why people act the way they do.
She has trouble putting things into words, sometimes, though it's easier when she types. Handwriting would work... if she could read her own writing. She mostly can't, though.
She might not look you in the eye. She might take you very literally. She is Autistic.
She isn't scary. She is Autistic.
Posted by Alyssa at 12:00 AM