The Words Aren't There.

There are multiple ways for the words not to be there. In this case, it is that the words strong enough Just Don't Exist. The capitalization is for emphasis, in case you were wondering.
People are continuing to blame this on autism, specifically on Asperger's, which I have yet to see confirmation of Adam Lanza, you know, actually having? I've heard a neighbor say he might have, and I've heard lots and lots of speculation, but no, I have not seen anything that suggests he really did. The logic of "Gunshots are sudden loud noises and Autistic people usually have sensory processing issues" says that I'm not really sure why people keep thinking this is an autism thing, anyways. It's not correlated, by the way. 95% of violent crime? It's done by someone who's not diagnosed with any mental illness or developmental disability and probably not diagnosable, either. It's just a scapegoat.
That doesn't change what's going on, though, and the words for how I feel about it Just Don't Exist. Scared isn't strong enough. Terrified isn't strong enough. Outraged isn't strong enough for the part of me that is reacting with anger.
See, no matter that I and much of the autism community are in debunk mode, just trying to do damage control, no matter that even some news organizations are starting to say that autism doesn't cause this, people still want a scapegoat, and autism (apparently Asperger's in the specific) is what they've got as a scapegoat.
So they say things like this in the comments:


There's a really, really weird teenager who attends my church. He has Aspergers. Yesterday I reported his odd behavior, along with several examples of strange stuff he has done and said, to the police. It's worth reporting this kid to authorities now that I know how dangerous his disorder can be."

And they say things like this in the comments:

Or they rant at their autistic family members for expressing potential fears about their safety:


He sent me a lecture about how that was paranoia, classroom inclusion was bad, and people with disabilities belong in institutions.

Here's a screencap in case he decides to take the post down. Fellow Autistics, you deserve to have some idea who to avoid, at the least.
Sometimes Facebook: 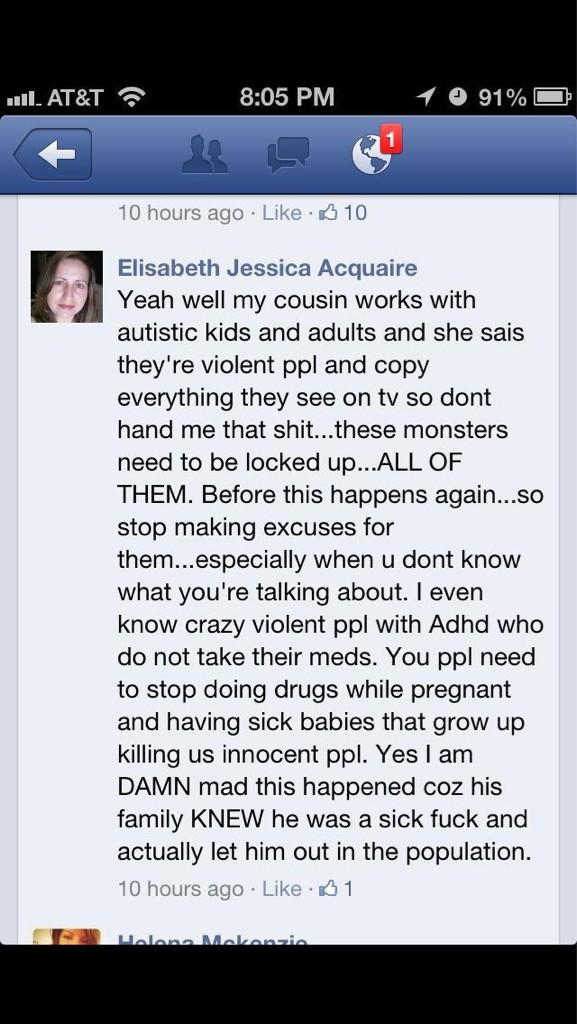 And the bigotry of others is retold on Facebook:


"Honey, I have Ivy League degrees in this, and I work with these people every day. People with Aspergers have compulsions. And, maybe it didn't drive them to murder in other cases, but in this case, it was his Aspergers, and nothing else, that made him kill those children."

And they write articles about science not counting, insisting that we really do things like this.

Yes, that's really happening.
So is this, though it appears that Facebook has since removed the page:

And yes, that exact thing happened earlier this year. The kid died. This specific person may have been joking, but these things actually happen.
People are stating that their autistic children could be the next killer based on the fact that they have violent meltdowns. There are a bunch of problems with that, both logical and for the community:
Karla noted that disclosing at work was not currently possible due to the association of being Autistic "like that kid that just killed everyone." She also suggested keeping kids who are prone to meltdowns home this week, as people may be quicker to call law enforcement on Autistic people than usual. Given the commenter who claimed to have already reported someone just for having Aspergers and being odd, I'd believe it. Given the tendency for law enforcement to misread Autistic body language and for us to be hurt or killed, I would be very careful. There is more backlash against the people suggesting the link than I expected to see, but there are still many, many people claiming the two are linked or thinking that being Autistic makes us dangerous.

The words for how I feel don't exist. I am mourning for these people who are no longer here. I want to focus on them, but there is nothing I can do to help them, not really. I only have so much energy to devote to responding to this, and it's getting sucked up in damage control for the autism accusations and to warning people to be safe. I have no words. There are no words for the person who killed all these people, nor are there words for those who would blame it on a disability the shooter may or may not have had, one of the victims probably had, and is already far too stigmatized. The words Just Don't Exist.
Posted by Alyssa at 4:29 PM